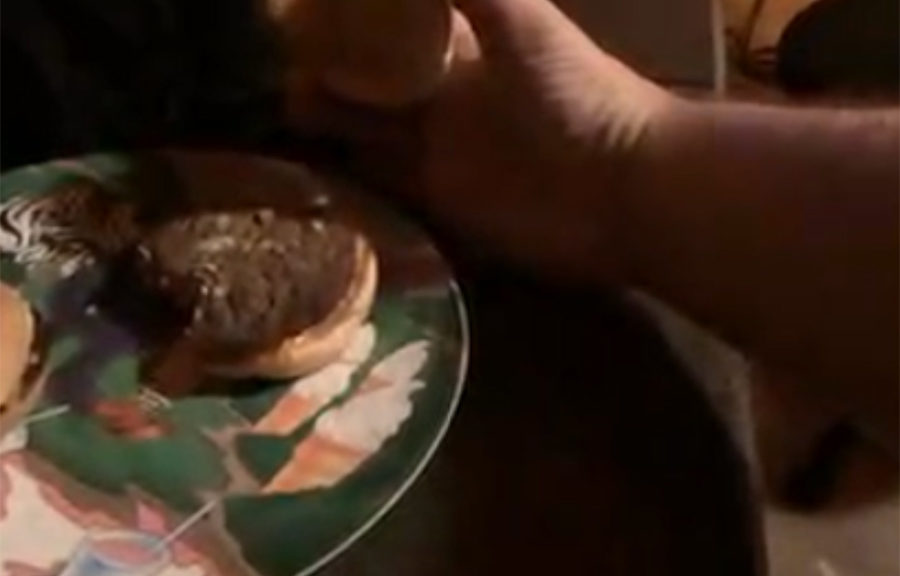 Okay, told you the experimentation was gonna begin almost immediately, and, that time came. Early last week, Billy and I went out to get me set in the event we went on statewide lockdown, and even though all the restaurants had closed their indoor seating, we could still do drive-thru. Mickey D’s it was. (2 for $3? Hell yeah!) We wrapped up for the day, I threw my leftovers in the ‘fridge and, wouldn’t you know it? Forgot about ‘em…for 6 days.

(Admittedly, had I left these bad boys in the microwave, I might’ve thought twice about cooking them. I mean, I still would have, but at least I would’ve weighed the wisdom of it). Now, while I love McDonald’s, I can’t stand leftover McDonald’s. Once it’s in the ‘fridge or I have to nuke it? Nope, rather have something else. Mickey D’s may hold up well being put in a plastic box and not turning to glop after a short amount of time, like 3 years, but once they’re a day or four old and chilled thru-and-thru? To me, there’s no rescuing them. But…if one’s gonna experiment on something, why not experiment Victor Frankenstein-style, and try to resurrect something Hence: Air-fried Double Cheeseburgers.

Verdict: Unlike the Nacho chicken fries, the burgers-back-from-the-dead (zombie burgers? Hmnnn) experiment was not a victory. Not a failure, as the pic shows, that’s a first bite taken. Meaning, there were more. In seeking a second opinion, Mouse got a piece, too, and she enjoyed it, so there’s that. But I probably should have let them warm up enough to take the top buns off, and cooked the bottoms & meat first. The buns got rather toasted, like on a BBQ grill, so that wasn’t bad, but the meat was still only lukewarm, and I wasn’t about to cook them any longer. I’d say, swung for the fences on a ball thrown in the dirt, and got juuuuuuuuuust enough of it to foul it off (That’s for Nick Smith and my baseball fan friends who are going through Opening Day depression). Will I try it again? Ehh, maybe. Barbers didn’t cure the plague bleeding those first few patients totally dry, right? (Yeah, yeah, poor example, but my sensitivity valve’s never had a restrictor plate. There, covers my NASCARites, too). Next up? Thinkin’ mozzarella sticks.