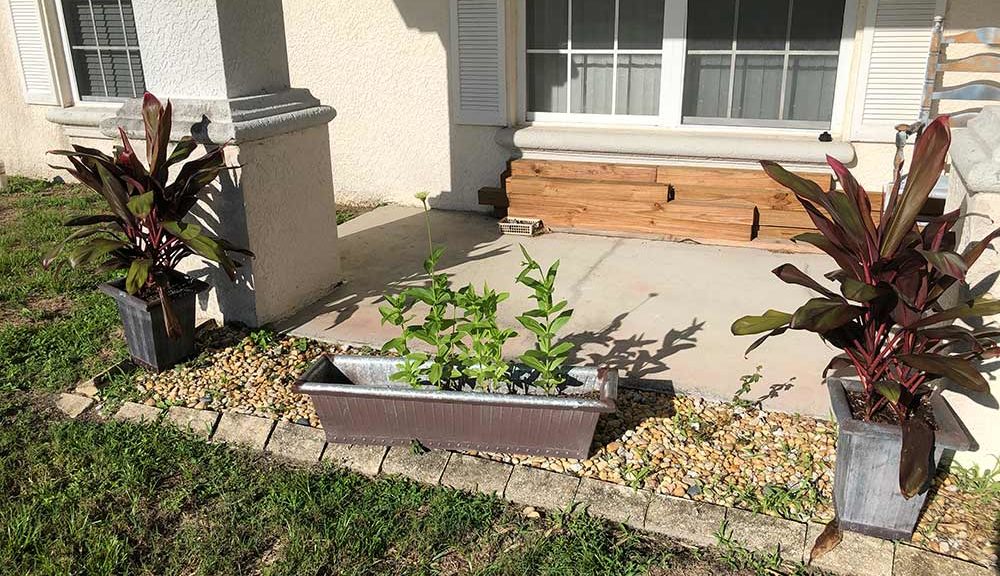 Lot of pics today, so this post should do awesome on social media. (Yes, sorry, that was a shot—those that figured it out’ll probably appreciate it even more).

Back in March when I felt lockdown was coming and Pam was heading out of town, I prepped. I figured Billy might not be able to come by as often, so I stocked up on a bunch of bulk groceries. Freezer full, I took care of the dog and cat food needs, snagged extra treats & toys, and crossed that off my list. I knew I’d be writing a lot, but made a project list that included a new screenplay, a new short story, and re-editing an existing story from my Kindle pg. The last thing I wound up accomplishing with Billy before the announcement came—the day after Pam left—that lockdown would start in 48 hrs, was…

Buying a package of seeds.

This was a total side project. Something I could do without any assistance, because if it failed, ehh, I wasn’t gonna feel bad. The seeds? I don’t know what they were. I told Billy, “Anything that looks like it’s got some purple in it? Yeah? Okay, snag me one of those.”

Then, the tough part. I had a bag of top soil that had been out in the yard, in a planter, keeping Mouse from digging in a spot where she’d gotten out under the fence last year. Billy threw a paver in the hole, kicked in some dirt, and brought that bag around front for me. As I’ve mentioned before, it was similar in many ways to concrete, similar in others to Sahara. Not functional. In every way, it was grave dirt.

However, to me dirt is dirt, and I had had a power outage here at the house that left a lot of spoiled stuff in the garage freezer. As you can see, that rotten chicken and beef and a Jamaican beef patty became the foundation for my attempt to resurrect this dirt, and get something to grow out of it. I lay in some of this not-so-top soil, dumped in the rot, covered it up, threw in a couple handfuls of fresh dirt, and watered it. Left the planter half-full, in the FL heat. Hoped some worms would come visit. Over the next few weeks (5 in total), I tossed in scraps & food on its way out. The occasional baby carrots at the end of the bag that were getting mushy. A fatty piece of chicken. A bulb of garlic that had been forgotten about on the counter. Anything Mouse wasn’t interested in (or couldn’t eat). Moldy bread. Into the planter it went. In went more bottom-soil. More water. More heat.

Couple weeks back, think it’s a month now, I was at the point where the planter was mostly filled. That meant it was seed time. I emptied the package into the planter, added a thin handful of fresh soil, and…Game On!

Pictured here is the end result. Pam was happy to see something in the planters—these were hers, after all, from back when we first moved in, and, they’ve been rather empty for most of our time here. That worthless soil? Looks to be a piece of the planet I managed to save. Now, I’ve also added two more Ti trees because the first one’s been doing pretty good.

Am I going to clean tons of CO2 from the air with 3 Ti trees and a coupla flowers? No. I’m not kidding myself. But—perhaps the occasional (occasional is more than enough for me) bee will stop by. I don’t know if bees and these flowers have any reason to seek out each others’ company, but I don’t care. So long as the bees stay away from the door and yours truly, they can hang on my plants. The thing is, first and foremost? Trying to bring back a bag of dirt I probably paid $3.99 for 2 years ago is the kinda thing a stubborn guy like me will invest way more than $3.99 in time and effort to accomplish. The process of thawing out the freezer bags of rot, having to smell and touch that guck, on a ‘maybe’? Just washing my hands so many times that day probably made this a break-even project at best. The seeds were a buck. You do the math. But, it’s cool hearing Billy say, “Man, those things are looking good.” Pam likes them. So long as my Mom doesn’t come by and look at them (she has a black thumb, and can kill plastic trellis-vine), I’m glad it worked out.  Hope you dig the pics. It’s summertime in most places, if you’ve been thinking about throwing something colorful into a pot? Do it. Better to try and get a tiny benefit out of it than not. The environmental impact of these flowers and trees may be near-negligible. But—every little bit helps, and now? I have a little more little bit going on. Y’know? I’m good with that.