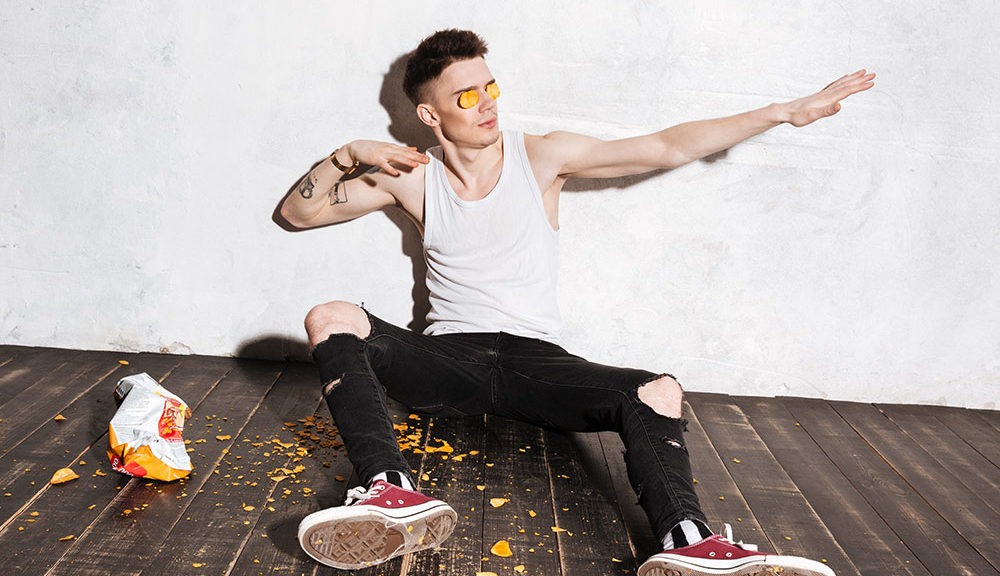 This one’s mostly for the ladies, because, there’s something you should know, whether you’re dating a guy, maybe living with a guy, or even married to a guy, especially in this ‘time of lockdown’. And, it’s this—if a guy grabs a tee shirt out of the dryer three weeks after it went in? It’s still clean. It’s fine. Nothing changed cosmically in the dryer in between the time it was loaded, the time it finished running, and the time we reopened it.

My Mom is freaking out right now. Some gals I dated in the past are cringing. They’re thinking: Wrinkles! Or, Dryer Fuzz! They’re getting hives because things didn’t go on a hanger! Th-th-things didn’t get folded!!!

Listen. Money needs to be folded. Sheets only need to be rolled into a ball and fit on the closet shelf where they go. That’s it. Towels? Same deal. They’re gonna come out of the same closet in most places, be used to dry your balls after getting out of the shower, and return to the hamper en route to another trip through the laundry. Or, maybe just get hung back on the towel rod for another use or eight.

You gals don’t understand this, but the life clock got turned back for men when stay-at-home orders went into effect. It didn’t happen instantly, so that might be why you missed it. But…by the first weekend? It was bachelor life again, whether you were home or not. It was dorm life revisited, (especially for single guys), but even you gals living with your man probably noticed. He didn’t volunteer to go to the supermarket out of the kindness of his heart, sorry. He went because he heard: 30 Days of Lockdown, and his Neandrethal survival instinct kicked in. He didn’t buy a case of Mac and Cheese because he was afraid the world was coming to an end like in a disaster flick, no. He didn’t do it to save money. No, he did it because it was an excuse to buy a fv@k!ng case of Mac & Cheese! The cheap crap, not the stuff that takes more than 2 minutes to microwave. Not just that, ramen. Did you think you needed the 96 count of ramen to get through 30 days when every governor in America promised that grocery stores would not close down? Of course you didn’t.

We got younger. If it wasn’t for social distancing, there’d be a keg in the yard and a buddy with some aquarium knowledge running a hose from the tap into a friend’s nostril while that guy was doing a handstand. That would ab-so-lute-ly be going on. But, since keggers are currently frowned upon? Doing laundry once a month, only two days after you ran out of underwear? Yup, all good. That concert tee with the hole in the armpit he said he would stitch up but never did? Yeah, baby, that is back in rotation! Because, you know, COVID-19.  The sweatpants with the mustard stain on the knee from the hot dog BBQ four nights ago? No, stop kidding yourself. He didn’t clean them, he turned them inside out.

This is like parents going on a milestone anniversary vacation when he was in high school. Two weeks without maternal oversight. Two weeks of, “I left you salad, and there’s some fruit in the bowl on the table,” and the fruit being tossed into the neighbor’s yard with the salad because a bowl that big was made for Doritos. Real food!

And so, if you’re wondering where that shirt came from that you’ve never seen before, given that he hasn’t gone clothes shopping  except at a football or hockey game since you’ve known him? It’s a time capsule. He’s traveled back, and that tee from a band you’ve never heard of with the screaming lead singer covered in blood and the slogan: If The Party’s In Your Mouth, I’m Coming! in 3 inch high lettering?

You gals? You don’t get it because usually, men don’t give a shit. You spend decades paying attention to face cream and supplements and nail guck and hair revitalizer and all this stay-young stuff. Men? We got a pandemic, baby. Means all the rules go out the window. That sock on the floor by the bed. Did I wear that one already? Ehh, who cares, the dog hasn’t been chewing on it.

Ladies, I would suggest you chill, ignore it all, and try to get a bowl of Captain Crunch before it’s all gone. In case you weren’t aware? The first two boxes are still on the shelf, but they’re empty, and the third one is iffy at best. You’re welcome.