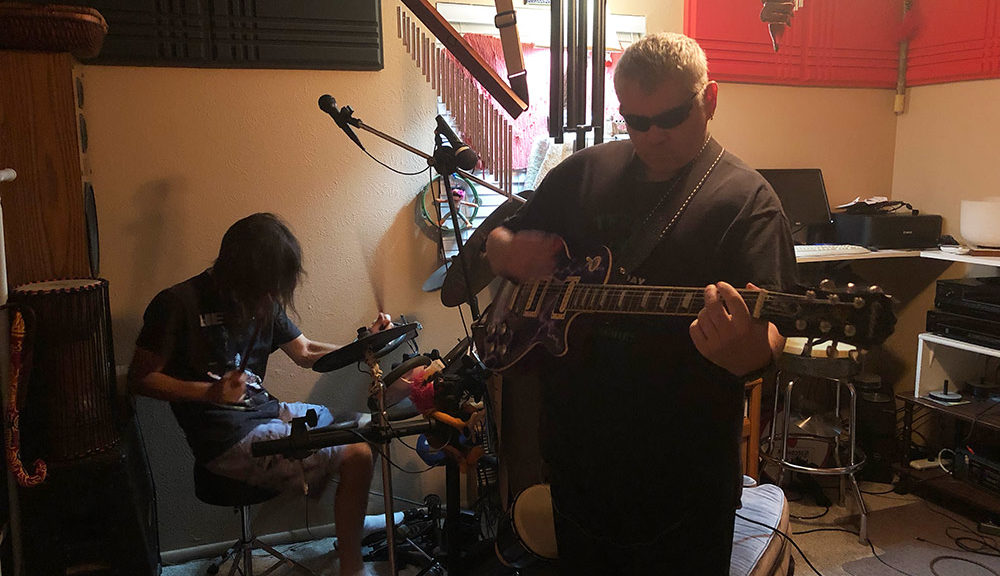 That’s my guitar buddy, Matt Michels, on the drums, yours truly playing the Les Paul. Neil Young’s “Rockin’ In the Free World” when Pam snapped this pic. Not that we’re planning on working Neil into the new film project, rather, a still from the Canon DSLR we picked up to shoot it. Pam currently has it in upstate New York, testing it out and snapping some pics for a haunted house flick I’d like to do after the current short is wrapped.

I’d heard a lot about shooting with a DSLR (the whole series Dexter was shot on a Nikon 800, if I remember right), and the results have gotten raves. We didn’t go for the Mark II D5 or Mark V D2 or whatever was the darling of indie filmmakers a couple of years ago, but we did pretty good, especially considering the price. (Thank goodness for pawn shops). From what Pam tells me, even if it’s not obvious in this shot, getting shallow depth of field is no problem, the quality of the video is way more than we need even for full-theatrical festival screenings, and she hasn’t even scratched the surface of what’s possible with this thing. We’re lining up shots for a new short now, doing some casting/re-casting, and hopefully we’ll have some clips and stills to show off shortly, so check back soon.

Catch Joe in the final video from Backstreets Sports Bar, performing one specifically for his Mom, and the one dedicated to his Dad, who passed away today in 2012.

Read and Watch at JoeMonks.com

First is When I’m Gone, which Joe dedicated to the troops and his father. Billy Martindale knocks it out of the park!

As well, for you classic rock enthusiasts, the guys did Southern Cross, by Crosby, Stills & Nash.

Blind director and writer Joseph M. Monks can’t seem to sit down. Among his most recent endeavours was picking up the guitar. Over Memorial Day weekend he took the stage at Backstreets Sports Bar.

It was a birthday present for his mother that was supposed to happen last November, but health issues forced Monks into the hospital.

“Back in November (Black Friday, to be exact), we were going to pack the bar, sneak my Mom out for dinner, and then bring her to Backstreets, where I was going to pull this exact same stunt,” Monks said. “She’d never heard me play, except on YouTube, so this was going to be quite the surprise.”

Unfortunately, a viral infection floored Monks the week of Black Friday and put him in the hospital for a week.

When a new date was available, Monks, along with guitarist/singer Billy Martindale and bass player John Fairfield delivered the goods to a packed bar. Monks’ mother had no idea what was going on, and spent the bulk of the time wiping tears.

Here are the first three videos from the gig.  We’ll be posting more of them in the coming weeks.