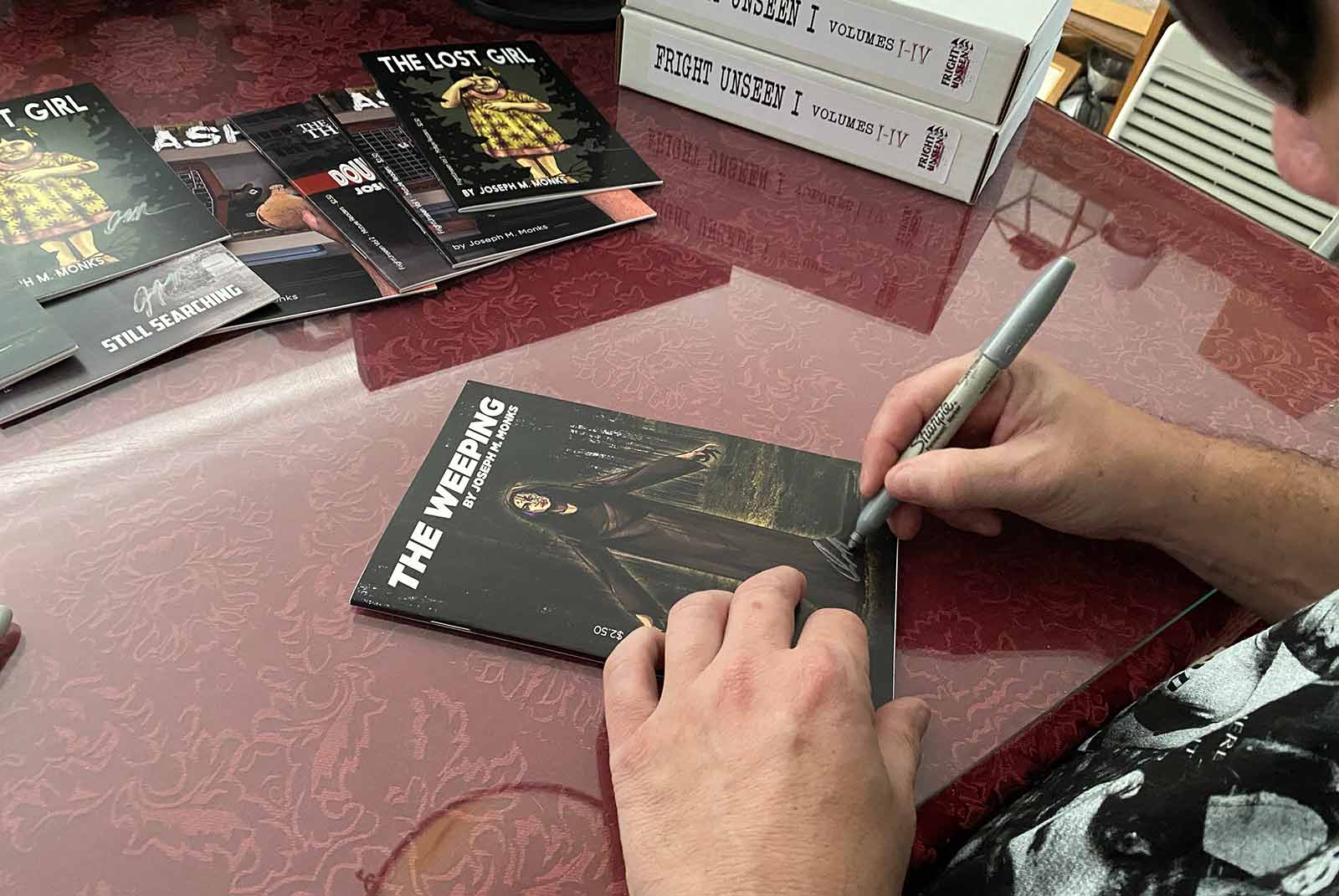 Started signing the books, and the first few packs’ll be en route to backers as soon as we have mailing addresses.

Been a long time since I had to sign this much stuff. I’m thinking the Ltd Ed copies of The Bunker when we released the DVD. Y’know—the DVD that naysayers said I would never get a distributor to put out. In case you were wonderin’… #TheyWereWrong

Threw on some goth/darkwave, got set up, Pam started laying down stacks of chapbooks, and just like an old Fred Greenberg con from the ‘90s, running Sharpies dry got underway.

Haven’t done a show like that in a while. In fact, my last coupla events were all film festivals. Few with lots of signing, but still—piles of books? Yeah, that took some getting used to. And…whetted the appetite. If you run a con in Florida or have a store and want to set something up, just get in touch.

If you backed the Kickstarter, thanks again. If not, we still have some of the top tier pckgs, which include the limited edition goodies, so if you want in on that before they’re gone, click HERE.

Also, if you want to share a pic of your Launch Pack when you get it, a selfie of you with some of the contents, we’d love to share those. Reviews on any horror site, your blog, or a shared link back here is always appreciated as well.

All righty, back to the smell of black and silver ink. In the words of Captain Rex Kramer, “Looks like I picked the wrong day to stop sniffing markers…” 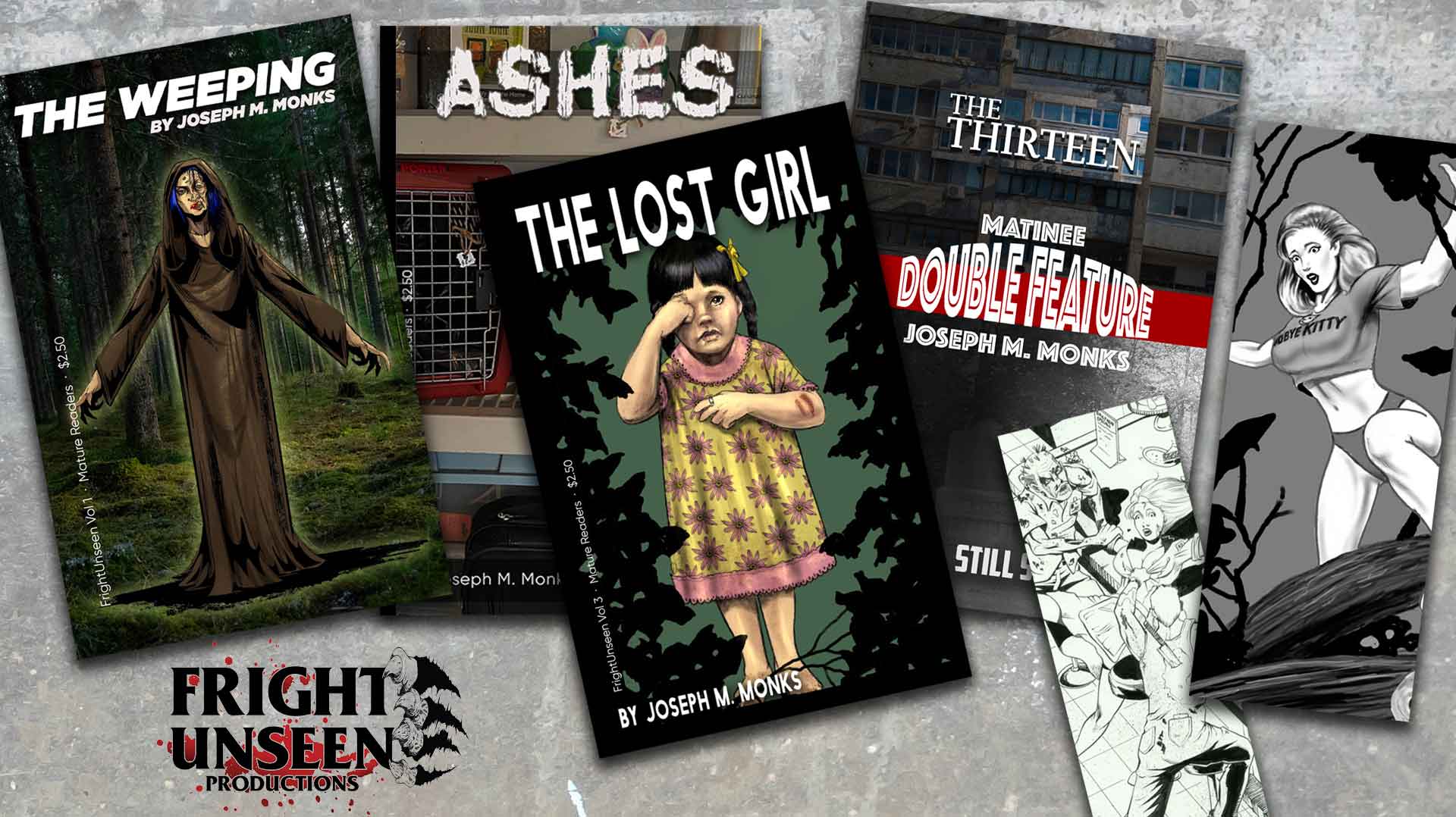 Welcome—and to many, welcome back. Apologies for having neglected the site and blog so long, but freelancing and screenwriting were the priority leading up to the pandemic, which kind of turned things upside down. That said, lockdown time did allow a lot of new material to come into being, including 2 screenplays, pieces sold to paying markets, and a big time return to short story writing, including a novella.

That novella: The Weeping, is included in the Fright Unseen Launch Pack (pictured). Still a couple of the top tier packages, which includes an item *from* one of the stories. But enough of that.

Right now, there are over 15 new stories in the can, and I’m scheduling those for upcoming Packs. Next up will be the Extreme Pack, with the kind of horror you’d remember if you’ve seen my Cry For Dawn work. Splatterpunk: The gooey stuff. The kinds of stories that make you feel like something dripped on you waiting for the subway. Stories that, when you finish, make you want to take a shower. Scalding hot, and with a scrub brush. Lockdown and Pam being trapped in NY for 7 months led to a lot of tales like that. It also led to the desire to flip the pandemic the bird and write something that touched on it, but wasn’t the central focus, which too many writers and streaming services were cranking out. Instead, I started with a concept that centered around someone looking to get out of the city, only to face a worse monster upstate. That story broke loose of its initial framework and grew into The Weeping, which I’m damned proud of. Friends tell me it’s pretty sweet in print, which I’m returning to because I’m tired of hearing comics are dying, and paperbacks are on their way out. Piss on that. I’m putting books out so fans and friends and readers and collectors can get ‘em signed. (Or not, up to you). Old-school.

So that’s where we’re at. Enjoy, hope you’re in for the long haul.